The best thing about the journey was the organisation, led by Gordon and Suzanne, a perfect couple responsible for resolving any problems, day or night. Amiably available at every moment, they were the key to the trip’s success, and without them nothing would have been possible, because the land was arid and the stages were only manageable with the help of exclusive air transport.

Essentially, Central Asia is the most underdeveloped gastronomic region in the world. When we were preparing for the Silk Road journey, we were already aware that we would not be enjoying our passion for gastronomy if it was not on board the privately-chartered jet. We knew beforehand that we were going to a gastronomic desert. However we were holding on to the glimmer of a hope that was sadly extinguished.

Modern means of transport have allowed the substitution of the Silk Road by the Suez Canal, the Tran-Siberian Railway or through the recent opening of the Arctic waters. Russia dominates everything with its Antonovs and its nuclear-powered icebreakers. These new routes have diminished the mythical historic route of Marco Polo of its role as connector of cultures, the true nexus of East and West, and now it is no longer that mythical route of cultural fusion. 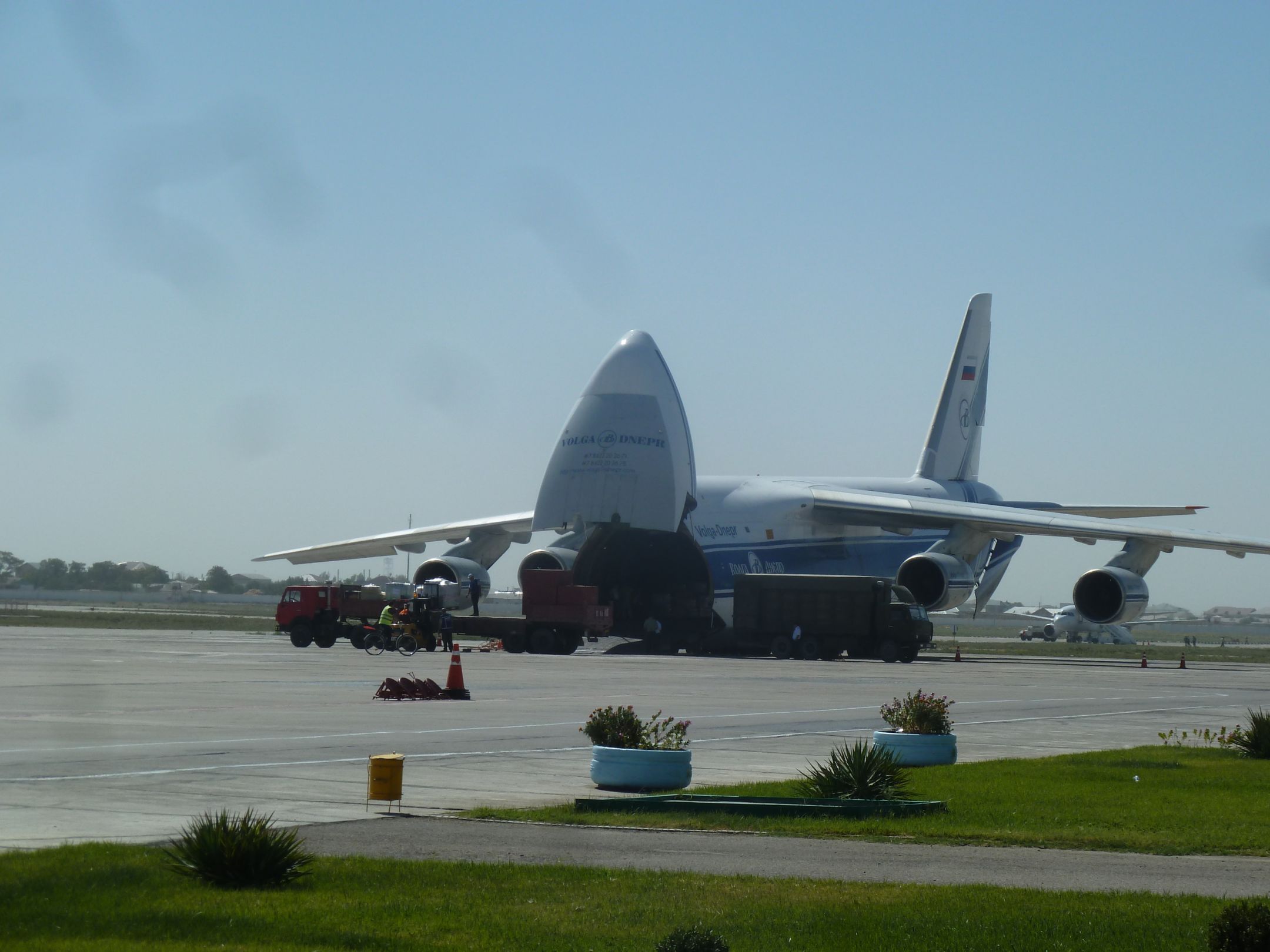 (The antonov has become the camel  of the 21st century)

In the Stans (Afghanistakn, Kazakhstan, Pakistan, Turkmenistan, Tajikistand, Kyrgyztan and Uzbekistan), access to quality food is very limited, even for their elites. The nation states of the Silk Road are the products of the Russian Revolution and the disintegration of the USSR. The nomadic diet was very restricted. The oasis settlements, although well irrigated, only enjoyed agricultural production in the summer, since the extreme winter climate did not permit anything to be cultivated, not even with greenhouses, which was why the people have developed a great ability of preserving food through different techniques.

I speak of geopolitics as it is one of the principal conditions affecting the access to primary materials and nutritional culture. Before the development of modern technology and the means of communication from the end of the 19th century and particularly since the communist revolutions, the majority of the population was nomadic and its organisation tribal, a social structure that still persists to a greater or lesser extent, as reports about the conflicts there often relate. Hence ethnicities and cultures have lived separately depending on their specialisation in a shared territory. This context periodically resulted in the emergence of a warrior amongst the nomadic pastoralists.

Continuing with geopolitics, it is clear that the current states emerged because Stalin wanted them to enclose the population. Consequently, like decolonised Africa, there appeared national frontiers, highly disputable but fully prevailing and, apparently, untouchable, even though they entail major ethnic conflicts.

In Kasghar, the most western province of China, adobe buildings are still being demolished with the objective of breaking up the population. The kashbas, Islamic strongholds, are a powder keg and so it is convenient for the Chinese government to create neighbourhoods and cities which are badly defined and socially disorganised in accordance with its powerful state rules. The measures taken to control Islam are efficient and firm; they begin, of course, with food. The standard foodstuffs are those of China; the most growing population is the Han, since, as colonizers, they have no limit as to the number of their children. Last summer the most prominent imam of the only legally authorized mosque was murdered; today in China, the imams are trained and controlled by the Peking government which is pressing on with the same barbarities that are destroying Tibet. 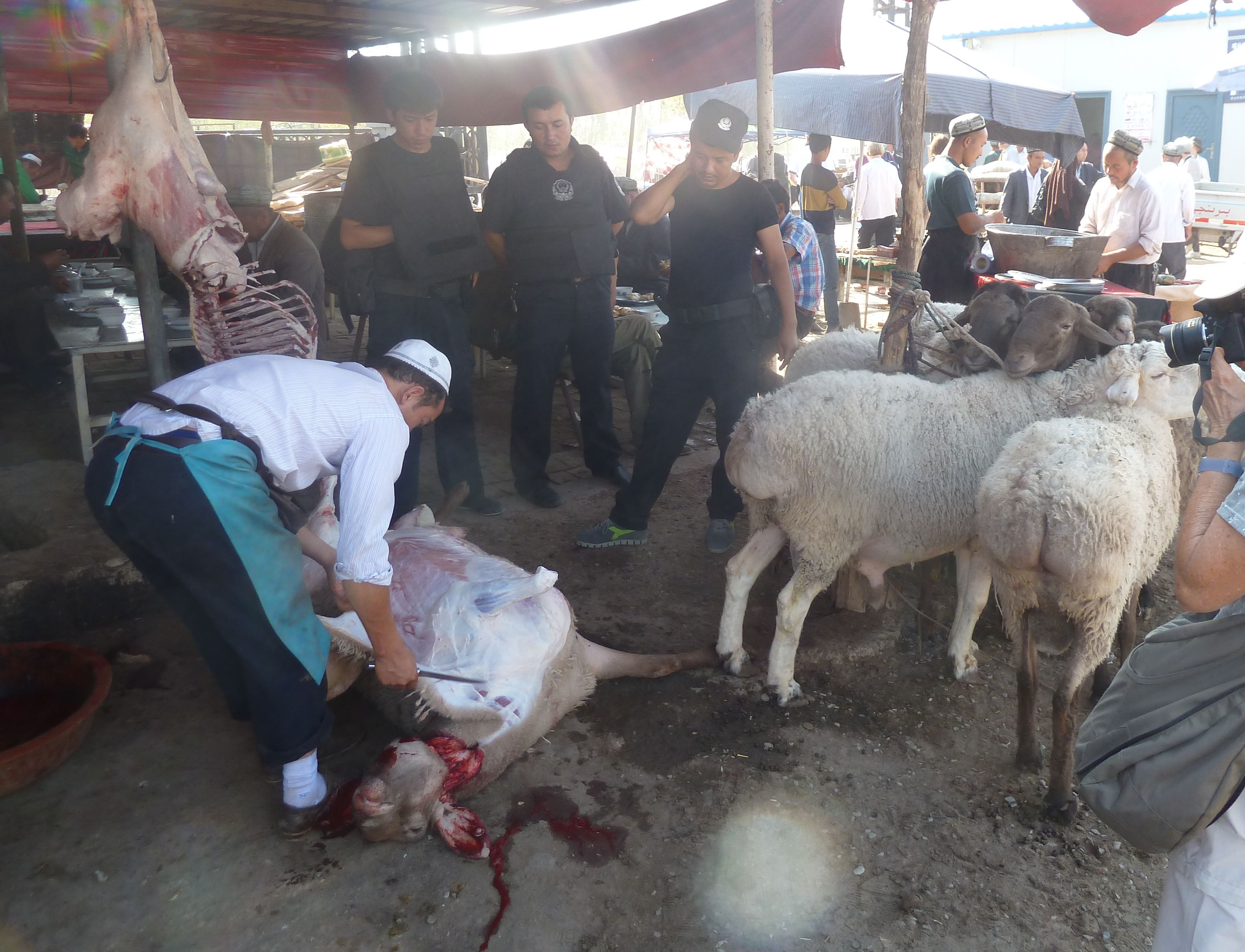 (Killing a sheep in the fabulous live animal market of Kasghar, the biggest in the world).

Nonetheless, the sought-after interbreeding is not catching on, and we already know how the Chinese government is accustomed to resolving this type of problem – it likes to do it in a Tiananmen Square.

Uzbekistan has existed formally as a state since 1991 following the collapse of the USSR. Tsar Alexander II occupied Samarkanda and Shiba in 1876, but not Bujara which paid a tribute to remain free. The tourist guides try to sell Timur (historically known as ́Tamerlane ́) as founder of the country in the 15th century, even erecting enormous statues to replace those of Stalin. However this warrior was a daring nomad, but without the remotest concept of a state, and an individual very different from Alexander the Great, who brought with him all the cultural weight of ancient Greece, including the teachings of his personal tutor, none other than Aristotle.

The diet on the Silk Road remains restricted by the scarcity of available food products. Even today, the diet has so little variation that the cuisine that it most resembles is that of a budget menu of a Lebanese restaurant. Supplies and large (or small) consumption goods arrive by the same routes as oil: mainly through Siberia.

The food? Eww! As I was saying, we ate more or less from the same version of the same illustrated menu. The most fantastic banquet had the same offering as usual, but within the exceptional setting of the great Madrasa of Samarkanda. Michelin, which gives stars for le cadre or setting, will give this establishment three straightaway when it goes there. We remain with the sublime memory of all that we heard and saw: the music, the amazing parade of models and all the food of which three quarters remained on the table. They told us not to worry about the leftovers, as it was the custom that they were enjoyed by the people waiting outside. It was good to eat light, because three quarters of the forty people who shared the airplane and the events suffered from intestinal problems. To be clear, this problem is not particular to Captain ́s Choice, but is widespread amongst western travelers in the region. 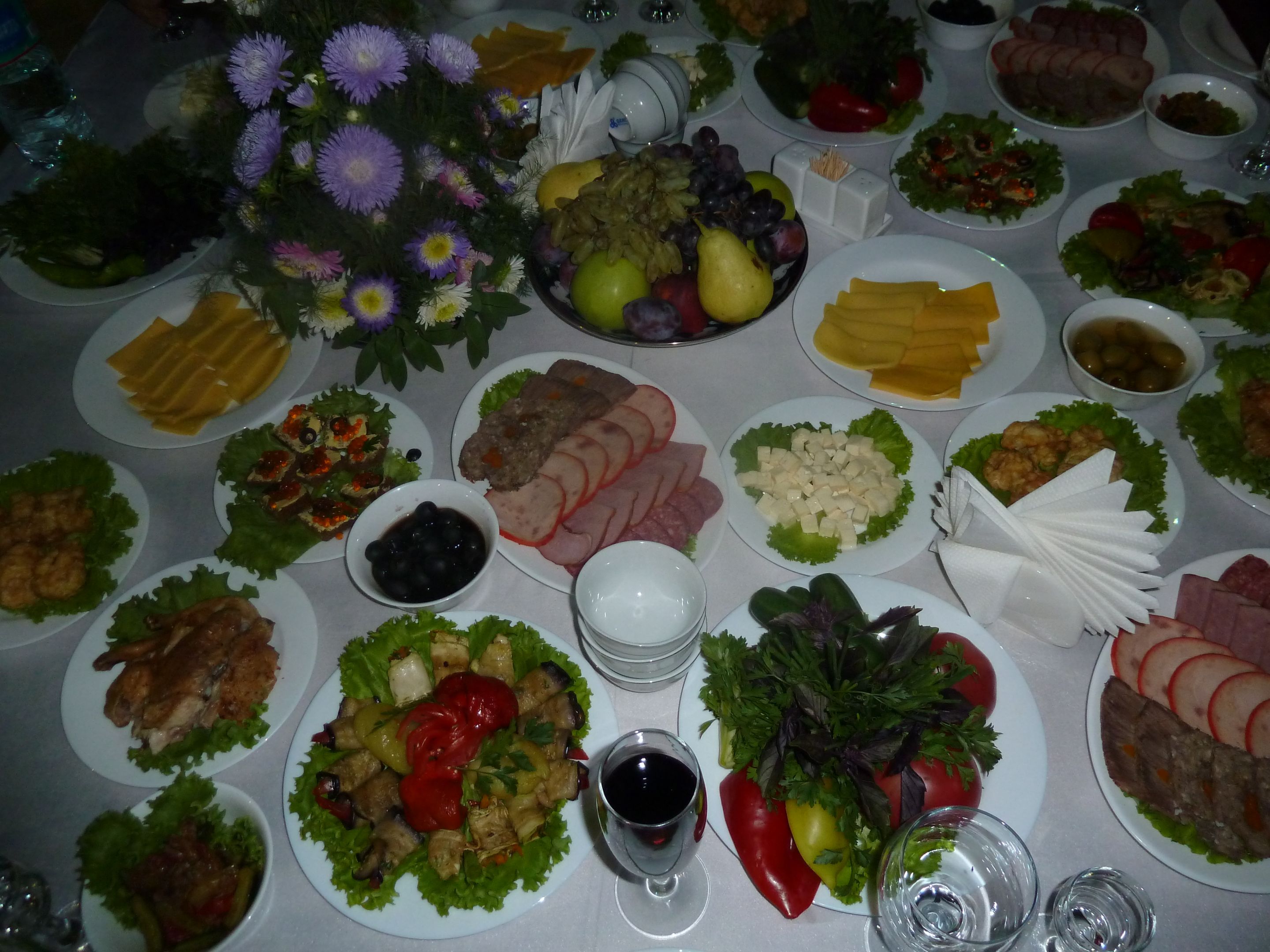 (Dishes served in the Samarkanda Madrasa, more decorative than effective)

Of the dozen meals, practically all identical in structure and ingredients, the most gastronomically acceptable was in Baku. The reason is very simple: in the capital of the Caspian Sea, merchandise arrives with relative ease and they have a notably wide clientele, the majority employed in the petroleum industry and with the highest purchasing power. Strong exchange rates enable them to eat well, import what they want and consume the last eggs of the Caspian Sea ́s exceptional Beluga.

With regards to Central Asian gastronomy, we can highlight three exceptions from the norm:

Pilaf. In the photograph you will see the ingredients prepared to cook this exquisite rice; we are not going to comment further, because this is not a recipe book and an image is worth a thousand words. Besides, developing a thesis about pilaf usually brings with it controversy in the same way that speaking of paella, arroz a la cassola or risotto does: each to their own. 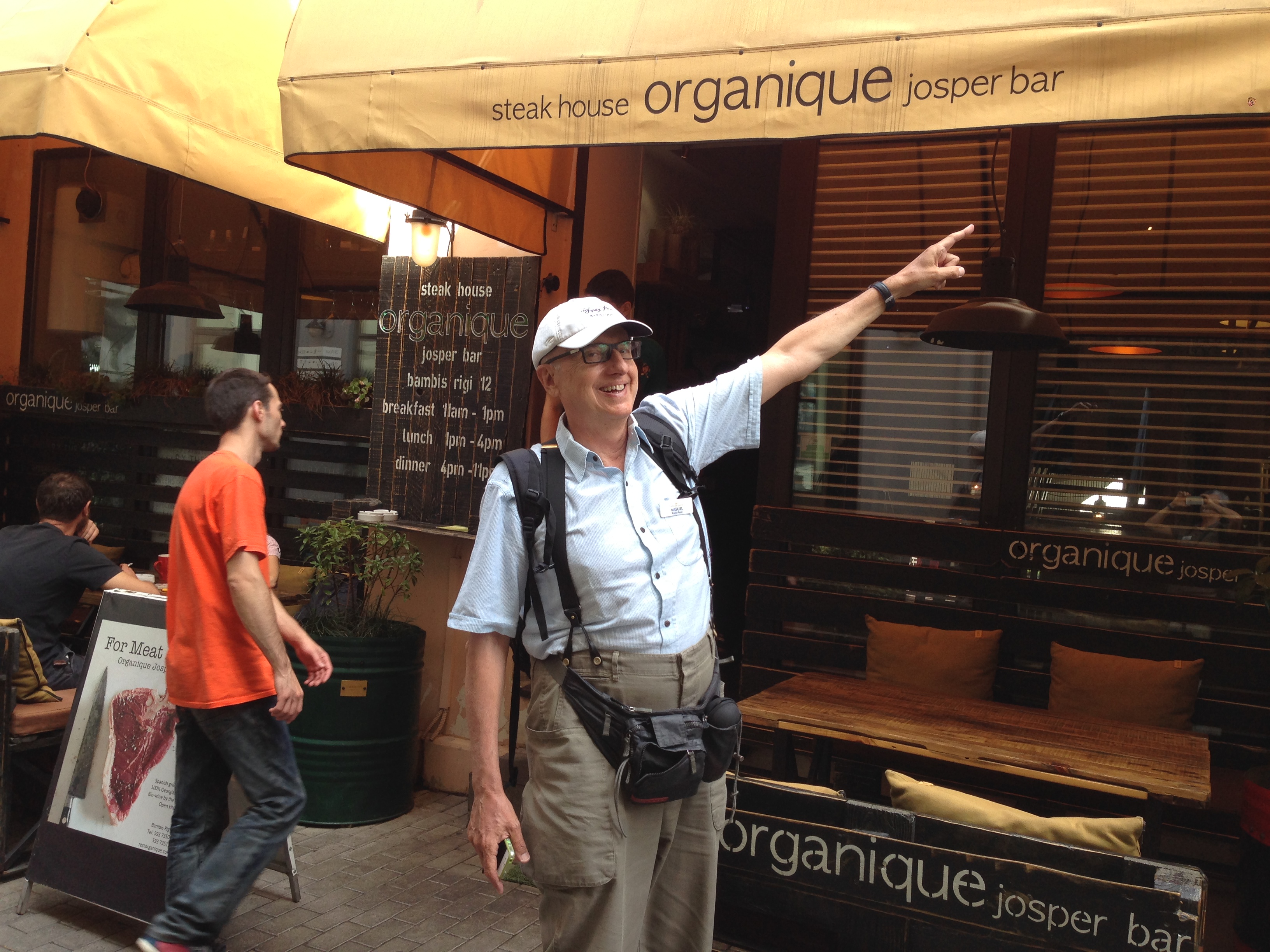 Bull from the Caucasian prairies cooked in the Josper Bar of Tbilisi was the surprise of the trip: because of the extraordinary quality of the product, the sophisticated means of cooking and the correct resting of the meat. When asked about the origin of the charcoal oven/grill combo, the restaurant ́s owner told us that he fled his country with nothing but his Josper. We ate here two days consecutively, as it was the only option of a minimally recognizable meal after so many days of gastronomic sacrifice. This exception was without doubt fruit of the cosmopolitan culture of the establishment’s management.

And the final item worthy of special mention is the Caspian beluga or sturgeon, a species at risk of imminent extinction because of the impact of the petroleum industry on a marine ecosystem progressively ruined from north to south on top of the overfishing of the female. I believe I have covered the key points of the market situation of this precious product, but there is not space and justification here for it to be dealt with specifically as a separate subject.